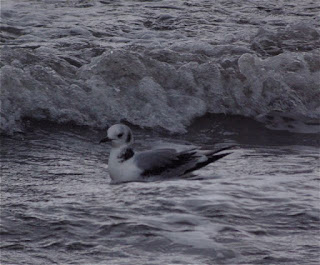 A walk round Seaton Point on a raw Wednesday afternoon had some immediate consolation!

Among the black headed gulls very close in, was a juvenile kittiwake showing very clearly the dark "W-pattern" across its wings. When it dropped on to the sea , I managed a quick pic where the ear spot and black half collar are visible along with a black bill.
As I reached the Point itself, I had a quick glimpse of perhaps fifteen brent geese hurrying south flying just  above the water line in spectacular close formation.
I walked away from the sea towards an area of set -aside and the ever burgeoning flock of linnets were immediately in evidence, doing their impression of a mini starling murmuration,as they moved restlessly from stubble to set -aside to hawthorn bush to telegraph wires and back!
Content to forage in the stubble field was a sizeable flock of fieldfare interspersed with a smaller number of redwing.  With my bins, I scanned  the few bits of tree in the area (straggly hawthorn bushes), one of which was host to a group of chaffinch.
I then got a glimpse of orange rather than pink and the scope confirmed at least four brambling were among them.
My first sighting of the species in Northumberland - I returned home cold but very content.