Tree Sparrows have been visiting our garden feeders regularly for the last four or five years, but until last week we hadn't had any definitive evidence that they've bred.  The photo is very poor - taken through none-too-clean double glazing - but at least it's proof. 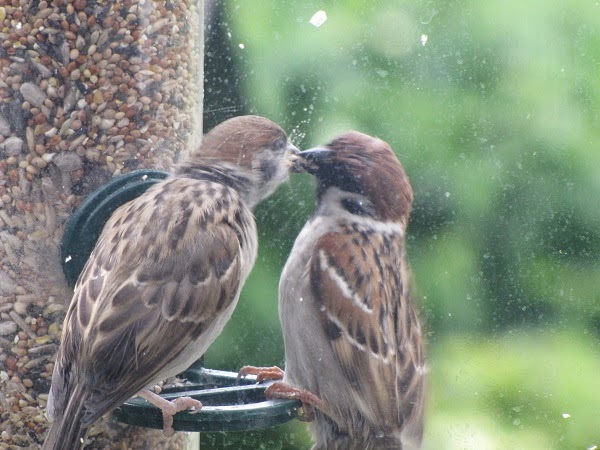 On a warm, dry evening with a light breeze we headed off to Holburn Moss, once we had settled down in shelter of the trees with good views across the moss we picked up the yaffling call of Green Woodpecker amongst the screeching calls of gulls on the wetter area. As the midges began to build we finally picked up the distinctive churring call of a Nightjar on the fenceline , this was then joined by the calls of another bird nearer the middle of the Moss. After a brief search we picked it out sitting on the top of a small tree,  a few minutes later it decided to fly and we were able to see its long narrow wings and it's distinctive flight.The time was 11.00pm so we headed home and spent a further 2 hours moth trapping, which we had set up earlier, this too was productive, catching a good number of moths including a Small Magpie and our second Elephant Hawk Moth of the year.

A trip down south

As it was the last day of our holidays we decided on a trip to Wykeham  Forest near Scarborough, we arrived at 10.15 about 15 minutes later than we had hoped due to traffic, note the time it is important.
On reaching the raptor watch point we were soon viewing a low flying Honey Buzzard, this was soon followed by several Goshawks some of them at quite close range as they circled ,swooped and dived at great speed , territory marking with their white lower tail coverts spread. The morning raced by with Common Buzzards putting in an appearance along with more views of Goshawk, meanwhile Tree Pipits sang from the surrounding branches.
After a brief lunch break we walked along the road into the forest in the direction of the tree nursery and were soon hearing the soft purring calls of Turtle Dove, a species which is under real threat but seems to be fairly reliable at Wykeham.
Back to the view point but very little to see, the clear sunny morning turning into a sultry, hazy afternoon,but a Green Woodpecker was heard from the valley below.
Finally why was it important to remember our arrival time?, well at 10.03 , 11 minutes before we got there some lucky observers were treated to a fly over White Tailed Eagle, isn't traffic annoying!
Posted by Unknown at 10:09 No comments: