When the dust settled

September is a great time to visit Musselburgh especially if you want Red Necked Grebes before they disperse. With this in mind we headed off with the dog early morning, on arriving at Levenhall Links there seemed to be a lot of people about and not just dog walkers, we began chatting to some people and found out the reason was at 12 o'clock they were going to blow up the chimneys at Cockenzie power station. As we headed off along the seawall there were 2 tides one was the sea, the other was a tide of humanity heading out of Edinburgh to watch the spectacle and it would be churlish not to do the same. At the appointed time there was an explosion of dust and the 2 huge towers sank slowly to the ground followed by a muffled thud, as the dust spread out a large flock of Feral Pigeons circled where their home had been. To our astonishment the large flocks of birds on the sea appeared to be un-affected, we counted 110 Goosander, 50+ Velvet Scoter and large numbers of Eiders, Wigeon and Grebes including 20+ Great Crested Grebes and 15+ Slavonian Grebes. On moving on to Gosford Bay the numbers were equally as impressive with more Great Crested and Slavs but also 7 Red Necked Grebes the birds we had hoped for, as well as several Red Throated Divers we also had terrific views of a Great Northern Diver now in full winter plumage, a great end to a great day in a fantastic birding area.
Posted by Unknown at 11:30 No comments:

As autumn approaches the numbers of moths caught in the trap are declining, however it seems to be a case of quality rather than quantity, this point was proved when a total catch last night of 7 moths included a real beauty in the form of a Merveille du Jour, a stunner which reminds me of a chocolate peppermint cream, lets hope there is still time for a few more. 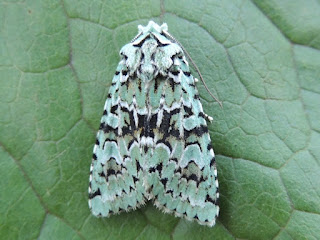 There were good migration conditions on Wednesday morning as 3-4 Crossbills and small parties of Meadow pipits flew south west over 5 Front Street in the morning.

In the College Valley, there was a reasonable passage of Red admiral and Peacock butterflies mostly fling in a westerly direction.  Interestingly, there was very little Meadow pipit movement on the tops of the hills.

A Black-throated diver was off-shore at Alnmouth in the evening.  Three Pipistrelle bats (species unknown) were hunting along the shore line.
Posted by Unknown at 02:01 No comments:

Yesterday was spent on the top of Cheviot surveying vegetation.  Forecast looked good but conditions were very cold (gloves on for the first time this autumn) and very windy.  Despite this the survey went well.  Interesting plants include stands of Cloudberry, lots of Stiff sedge, patches of Cowberry and White sedge to name but a few.  To me the most interesting thing was that Heath bedstraw and Tormentil were still in flower.  Furthermore, in the gullies there were stands of Sweet vernal grass, Common sorrel and Tufted hair-grass - all species that are very common 500 m lower down.

There were very few birds with the exception of 4 Ravens, 26 Red grouse, 10 Meadow pipits and a Merlin.  There was evidence that Otters were using the watercourses on the top and there was also a young male Roe Deer!  Short-tailed field voles were in abundance and there were some much larger holes that may suggest Water voles - in Scotland this species can be found in very low numbers on upland blanket bog (further investigation is needed).

A great day despite the temperature!
Posted by Unknown at 05:07 No comments:

The last two days have been spent catching and releasing freshwater white-clawed crayfish.  The aim is to establish an 'ark' site in suitable habitat and water conditions in rivers/streams where they do not exist.  The River Wansbeck is 'the' river for native crayfish in the UK if not Europe.  Other populations have Signal Crayfish or other species that carry plague within their catchments and the natives will most likely become extinct.  The pioneer native crayfish, under Environment Agency / Natural England licence, were moved.  Most appear to have settled into the their new homes.

Kingfisher (1), dipper (2) grey wagtails (2) and a migrant hawker dragonfly were present at the 'donor' site on the Wansbeck.  There was  a lot of evidence of otter  with both spraint and tracks.  Otters do target crayfish at this time of year. Male freshwater crayfish set up territories on the bed of the watercourse and guard them with vigour. Unfortunately, this means that the males are easy prey for our aquatic mustelid.

Large numbers of meadow pipits, chaffinches and goldfinches have appeared in the last few days.
Posted by Unknown at 09:05 1 comment:

The first week of September has been a strange one.  The odd Common swift was still flying high in the early part of the week.  Secondly, Sand martins chicks were still to fledge by mid-week.  I understand that there are some very late broods of Sand martins in other parts of the Country. Despite the cold temperatures, Willow warblers and Chiffchaffs are still singing.  There has been a steady passage of Siskins.

The Wooler Water has produced good counts of Grey wagtails (up to 5) and the flock of Goldfinches has increased to at least 75.  Dippers and a Kingfisher have been seen regularly.  The Sand martin flock had reduced to about birds and at least one of these is a fledged youngster.

Finally, people may have noticed that large numbers of spruce trees especially Sitka have turned brown or even grey.  This has been caused by the Sitka louse Liosomaphis abietinum.  Apparently infestations can take place after dry and relatively warm winters.  The problem is particularly acute on the eastern side of the County.  Once you get to Bellingham, there is little evidence of the problem.

The Dodds family were on holiday last week in Norfolk.  It was a holiday of mixed emotions; from a 5 hour traffic jam around Kings Lynn to watching Hobbies hunting dragonflies over reed beds - I think the latter was worth the heat and angst.

Large wetlands filled with birds and dragonflies were the order of the day.  Highlights included a Bittern flying over the reeds at Minsmere, Cranes and Marsh harriers at Hickling Broad and the wide range of waders at Titchwell and Cley (24 species in the week).  7 species of dragonfly and damselfly were noted along with 42 species of moth.

Two thoughts from the holiday were;  birds do not like the sea off the Norfolk coast - the largest flock was 12 Sandwich terns!.  Secondly, nature conservation organisations in the North East lack the vision and drive to create a large wetland complex of the scale of Titchwell or Cley. Today's nature reserve seems more about selling memberships and fluffy toys than the wildlife experience.