In search of Painted Ladies

The weather has been so "un-summery" most of the time in July and August that a large irruption of migrant Painted Ladies was always unlikely this year.

But determined to get a year tick, earlier this week, I spent a good few hours around Boulmer Steel trying to locate one or two.
The strong south westerlies led the few I saw, to seek the shelter of the boulder clay bank at the very edge of the shore. 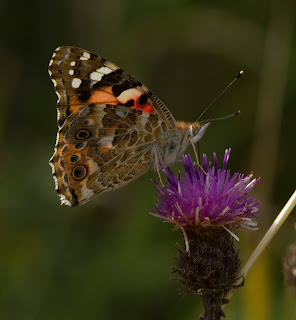 But thankfully the lure of Knapweed nectar eventually enticed one individual into a photo -opportunity.

Looking at the weather charts we noticed a high over Scandinavia and a low over Britain with rain and northeasterlies yesterday, this promised maybe a few good birds for today, so early on we headed for Holy Island. Our first port of call was the Snook and after 10 minutes we were checking out the garden at Snook House, Keith caught a glimpse of an interesting warbler, which eventually came out into the open and proved to be an Icterine Warbler, our first in Northumberland since 2008, this was a great start and boded well for the rest of the day. Our next stop was at the Half Moon slack, here we carefully walked up either side of the bushes and eventually found our second rarity of the day in the form of a juvenile Barred Warbler, it flew into a bush and joined another bird which also turned out to be a Barred Warbler, we left them in peace and continued on only to come across a third bird. We next headed for the Village and gravitated towards The Straight Lonnen, very little was seen except a female Marsh Harrier cruising about over the nearby fields, on reaching the Willows at the far end we noticed several birds moving about, one was a Pied Flycatcher along with Willow Warbler and Chiffchaff, the final bird of the day was, yes you've guessed it a Barred Warbler, our 4th of the day, bring on the autumn!.
Posted by Unknown at 08:02 1 comment: