A Tern up for the books

The scene - the bird news channels show that a rare Bridled Tern had turned up on Inner Farne and we were too late for the boat, however a boat was being organised for the following morning, so we booked up.
The next morning saw us with about 40 others from as far away as London by the harbour wall at Seahouses ready to board our 6.00 am boat to paradise. Word had come from the island that it was still there, the tension mounted as the 20 minute crossing seemed to take hours. On our arrival we were greeted by head warden David Steele, who informed us that the bird was showing well next to the jetty,cue a mass exodus from the boat which began to list at an alarming angle. For the next 15 minutes all of the stress was worth while as we enjoyed great views of this supremely elegant dark grey and white bird, after a while it disappeared further over the island, at this point we got onto the boat and headed back happy to the mainland and were home for 8.30 am, just in time for breakfast,then out with the dog around Branton Ponds where you've guessed it a Tern was flying over the water, but due to the poor views we would have to put it down as a "comic" Tern , just proves that the early bird really does catch the worm. 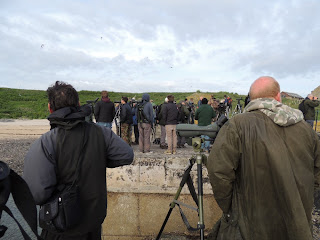