The garden insect scene has really livened up over the past few days at Titlington Mount.  We've had White-tailed and Buff-tailed Bumblebees around, particularly on heathers, for at least two weeks, but now they've been joined by Red-tailed queens.  Plenty of Small Tortoiseshells and the occasional Peacock taking advantage of the Aubretia.  But my particular spring insect, the Bee-fly (probably Bombylius major) has been present in twos and threes since we returned from a short break in Skye last Tuesday.  Again it's the Aubretia it prefers. 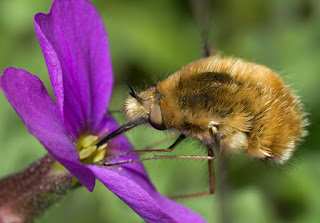