A walk along our farm road and along part of Titlington Lane yesterday (20th) revealed 21 species of plant still in some form of flower.  I'll not bore people with the full list, but one particularly good spot was in a gateway churned up this summer by logging lorries.  There was a prolific patch of a less-usual Groundsel species.  Most people will be fully familiar with our standard Common Groundsel, but Titlington Pike has both Sticky Groundsel and Heath Groundsel (Senecio sylvaticus).

Usually Heath Groundsel has finished flowering by September, but this patch was in very vigorous flower. 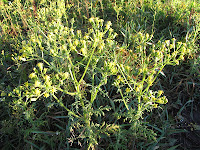