After Stewart and Richard's superb talk on Wednesday evening I decided to check out Branton Ponds for Dragonflies and Damselflies. The smaller Damselflies were much in evidence, the easiest to I.D. were the Blue-tailed then there were the Common Blues with their almost tree-like marks on the 1st and 2nd abdominal sections, having checked dozens I failed to find a single Azure with it's tell tale letter H marking on the same section. Then as if by magic a larger Dragonfly came into view, after careful observation it finally came to rest on some vegetation where I was able to observe it in detail and narrowed it down to another species which was mentioned in the talk, Black-tailed Skimmer, after getting this confirmed by Stewart I did as he had suggested and enjoyed the views of what was a new species for both me and the Ponds. 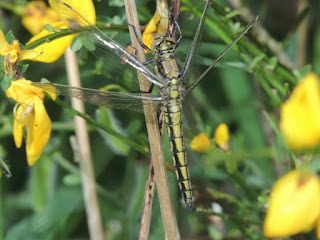