After a morning spent in the Cheviot Hills surrounded by low cloud we headed down to Lynemouth Flash to catch up with a Citrine Wagtail which first appeared yesterday. On arriving we were soon onto the bird  as it fed constantly at the water's edge, a small group of people had gathered and soon it was only about 5 metres away still feeding and totally unfazed. Next we headed to the Budge Screen at Druridge Pools which held Wood Sandpiper, Garganey, Little Egret, and a very smart male Ruff in full breeding plumage, Spotted Flycatcher was also seen dashing for insects from a wire fence, after an unpromising start to the day the sun was out and all was well in the world. 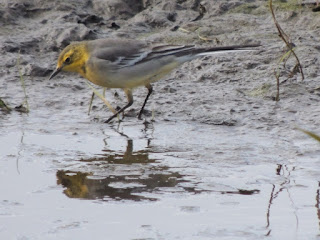