I need a time machine

At this time of year a time machine would be very handy and this morning proved the point. The choice was get up at 3 am to drive to Etal for the Bird club dawn chorus , with the added bonus of bacon butties afterwards or get up at a more reasonable hour and go to Holy Island to do some late spring birding. I decided to do the latter and was rewarded with a number of really good birds, the first was a smart looking female Bluethroat which was hopping around feeding off the turf at Chare Ends. Next a visit to the Crooked Lonnen  produced a distant Dottrel, the Straight Lonnen came up trumps with 2 Pied Flycatchers and another more elusive Bluethroat, this time a male with a limited amount of blue on the throat. Finally the star of the day in the form of a very active Subalpine Warbler feeding energetically on flies in a Hawthorn, there was much debate over what form but it was finally identified as a Western Subalpine Warbler. A great end to the day which would have been even better if I could have also fitted in the Dawn Chorus, maybe next year. 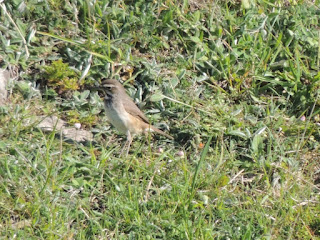 Female Bluethroat
Posted by Unknown at 08:21