Four intrepid souls met in the Bolam Lake Country Park at 10 am on Saturday morning.  Prior to meeting up a Cuckoo was seen on Longframlington Common and a Stoat was watched climbing 4 ft into a tree at the entrance to the car park at Bolam Lake.

The walk around Bolam Lake produced little of interest except for common species.  We discussed the identification features of Western hemlock fir especially its aromatic scent and the merits of some of the plants for lepidoptera larvae.  The main highlight was the discovery of 4 Red-eared terrapins (or slider) on a dead branch in the lake.

We moved onto Corridge Farm and were met by Richard Thompson.  A quick look at the woodland surrounding the parking area produced a Spotted flycatcher, Tree sparrows and a good selection of common resident species.  We arrived at the wetland which was alive with birds.  A female Mute swan was on a nest and there was a good number of Sand martins with a smaller selection of Swallows, House martins and Swifts.  A male Gadwall was a good find and this was a new species for the wetland.  The highlight was a pair of Yellow wagtails that fed in front of the hide.  These were joined by a second male.  There were lots of Reed buntings, Meadow pipits and Skylarks with smaller numbers of Sedge warblers and Willow warblers.  33 species of bird were recorded on our visit to Corridge. 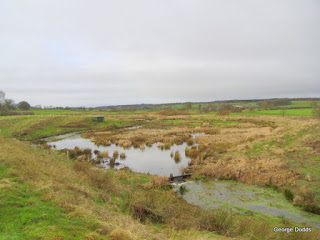 We thanked Richard and the group parted company.  I decided to visit Holystone Wood on the way home.  There I had cracking views at least two male Pied flycatchers.  Other species of interest included at least 2 Crossbills and large numbers of Wood ants.