Sorry for many months of silence.  Must do better!

At the September meeting Jim Clark brought in some stems of Juncus squarrosus (Heath Rush) from the moor at Harehope.  Many of the fruiting heads had small white cigar-shaped structures and he wondered what they were.

After considering fungal infections such as Ergot, I had a hunch that they might be moth-related, so I went up on to our moor at Beanley and found the same phenomenon on Heath Rush and also on J. effusus (Soft Rush) and J. conglomeratus (Compact Rush).  I took a couple of photos and sent one to Alan Fairclough with my query about whether these were micro-moth structures.

Alan was quickly able to identify them as the larval cases of a micro moth called Coleophora alticolella.  Or at least it is probably that species - the other two possibilities are much rarer and a firm diagnosis can only be made by dissecting out the genitalia of the adult moths.

I'm sure there is a likelihood that these larval cases appear each year on the rushes, but neither Jim nor I had noticed them before.  Thanks Alan! 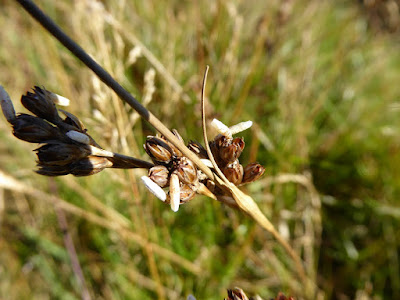