We set off early on Saturday morning for Druridge Pools, or more specifically a patch of Blackthorn about 200yds to the north. The bird we were looking for was a Subalpine Warbler, a small group of birders had gathered and after a short while the little beauty appeared(rubbish photo attached), it kept us entertained for quite awhile as it flew from bush to bush 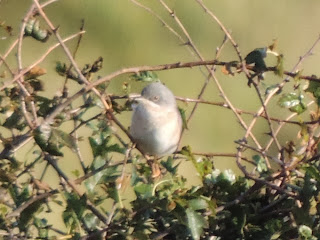 All of this before 10 o'clock, we were on a role so we then headed to St Mary's wetland near Whitley Bay where we soon had our second little sprite of the day in the shape of a tiny little Firecrest which flitted endlessly amongst the upper branches of a Willow tree,whilst in another group of Willows we managed to find a Yellow Browed Warbler,other birds included a couple of Stonechats and at least 1500 Golden Plovers(but no American) on rocks north of St Mary's Island. 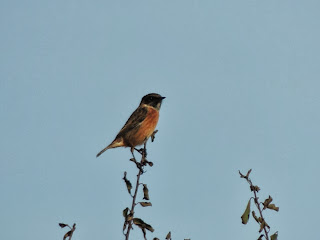