I was sitting at the computer this morning with a feather in hand looking at a bird book and mulling over emarginations, luckily at this point my attention was drawn to a commotion outside and a thump as a large bird hit the window. As I looked at the powder impression left on the glass I noticed a juvenile Sparrowhawk perched in a tree just outside, it was quite recently fledged and still had a number of white feathers on it's mantle and wings. After a short rest it flew off, later in the morning my attention was drawn to Wrens and a Robins making a real racket down the garden, I was expecting a cat but there on the hedge was the juvenile Sparrowhawk looking very subdued, it must have flown into another window as it remained there some time, long enough for me to get one or two photos before it flew off. Many people would not be pleased to see such a bird in their garden, but as the top avian predator I think it is a privilege and shows a healthy population of small birds. 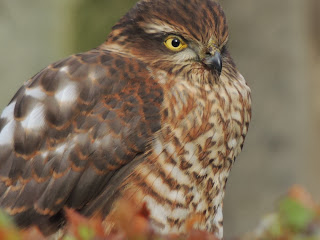 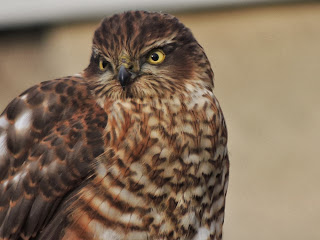