On Friday evening the weather looked good for migrants so we decided to go to Holy Island early on Saturday morning. We started at the Snook where apart from several Meadow Pipits, Whinchats and Wheatears the only other bird of note was a Barn Owl fast asleep in a Sycamore. 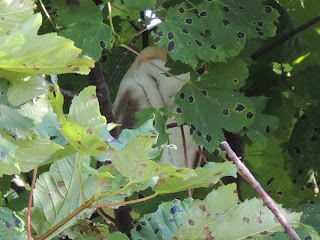 Next we headed off towards the Village, unusually the Vicars garden like everywhere else was very quiet as was the Straight Lonnen, so we decided to head back to the car, on our way back we were called across to a small bush by two other birders , on reaching them we were told they had a Nightingale or Thrush Nightingale in the bush. We had watched the bush for about 20minutes before we eventually saw some movement, at this point more birders turned up and the debate began as to what kind of Nightingale it was. At some times when in deep shade it looked quite grey, but when in the open looked more rufous brown , we felt it looked more like Common Nightingale but unless someone gets much better views or a good photo the debate will continue, watch this space!.
Posted by Unknown at 06:38