We were going seawatching this morning but decided to first try for a Rose-coloured Starling which had been reported at Roseden on fatballs. On arrival at the site we met the local farmer and had a good chat about the whereabouts of this bird, he had not seen it and couldn't think of anyone in the village with feeders out but he did suggest trying a cottage on the other side of the A 697. This looked more promising as the garden was full of feeders with lots of birds but no Starlings, after about half an hour we decided to go and come back later. As we reached the main road a number of Starlings appeared in the hedge and one of them was very pale, on getting better views we noted the pale buffy plumage with dark wings and a pale yellowish bill, it was the Rosy, not a stunning bird but worth looking for and perhaps greatly overlooked amongst Starling flocks. 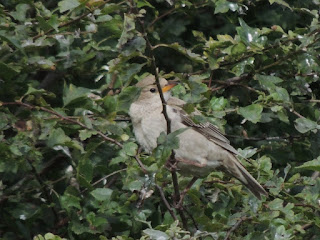